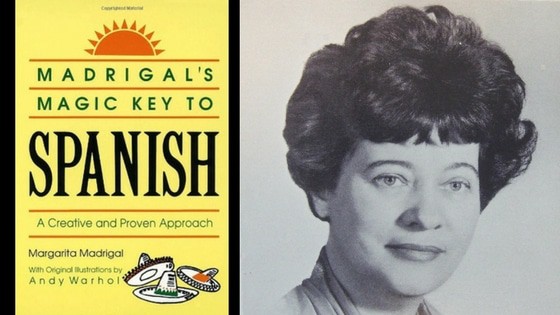 Sometimes something old can be new again!

Six years ago, when I first came across Margarita Madrigal’s “Magic Key to Spanish” I wasn’t expecting much more than another book claiming to be able to teach you conversational Spanish in a flash and then falling flat when claims exceeded results. At the time, I was interested in brushing up on my very rusty Latin American Spanish; the result of immigrating to Canada from Venezuela at a young age. What I was surprised to discover, however, was one of the best written Spanish language learning books I have ever come across…even though it was first published* in 1955.

Most people who know me, know that I have embraced technology wholeheartedly, including all the variant online learning tools currently available (Duo Lingo and Alison.com come to mind). But I have to admit that Margaret Madrigal deserves a spot in the limelight for what she termed her “creative and proven approach” to learning a language…and, believe me, she delivers! I have since used her book as a great resource to tutor expats and snowbirds looking to communicate in their Mexican environment.

Margaret Madrigal, born in 1912, was a Costa Rican American whose father moved the family around various Latin American countries during her youth. It was her Kansas born mother, insisting the children learn and keep up with her American English roots, that inspired Margaret’s love of linguistics. By the time of her death in 1983, she had written no less than 25 books covering seven languages. The “Madrigal’s Magic Key to…” series began with the Spanish book and grew to eventually include the French and German versions.

As a young woman in the 1940’s and living in the trendy “Bohemian” community of Greenwich Village in New York, Margaret’s teaching techniques became so well known that she was in high demand as a tutor an teacher to some very prominent people. Among her students were various ambassadors, the tennis champion Alice Marble as well as author and self described “rascal” Ernest Hemingway.

“When I was faced with the task of learning Spanish in a few weeks Madrigal came to my rescue with her remarkable method and I found myself speaking Spanish with ease and pleasure.” Stanton Griffis, Ambassador to Spain and Argentina 1949 – 1952

In her book, “Madrigal’s Magic Key to Spanish”, Margaret teaches us little “tricks” to easily formulate the Spanish word or verb we need. One method is to simply add an “ia” in the place of the “e” in an English word ending with “ce”. For example POLICE becomes POLICIA. Or AMBULANCE can become AMBULANCIA. She also recommends that students first learn the PAST tense of a verb. The logic of this is that, in normal conversations, one usually speaks in past tense. For example, we rarely say “I drive…” but more likely, “I drove…”.

In her preface Margaret points out that, without realizing it, you already know many Spanish words. Words like popular, conductor, actor, central are exactly the same in Spanish as in English albeit with a slight pronunciation difference. And on the flip side, Spanish words such as constructivo, presidente, artista are easily recognizable for their English meaning.

For those of us that still like the old school tactile feel of a good book and prefer learning in a self paced environment, I highly recommend “Madrigal’s Magic Key to Spanish”.

*An interesting side note to this book is that all the illustrations were done by Andy Warhol. It’s quite likely he was one of her Bohemian friends from the Village!