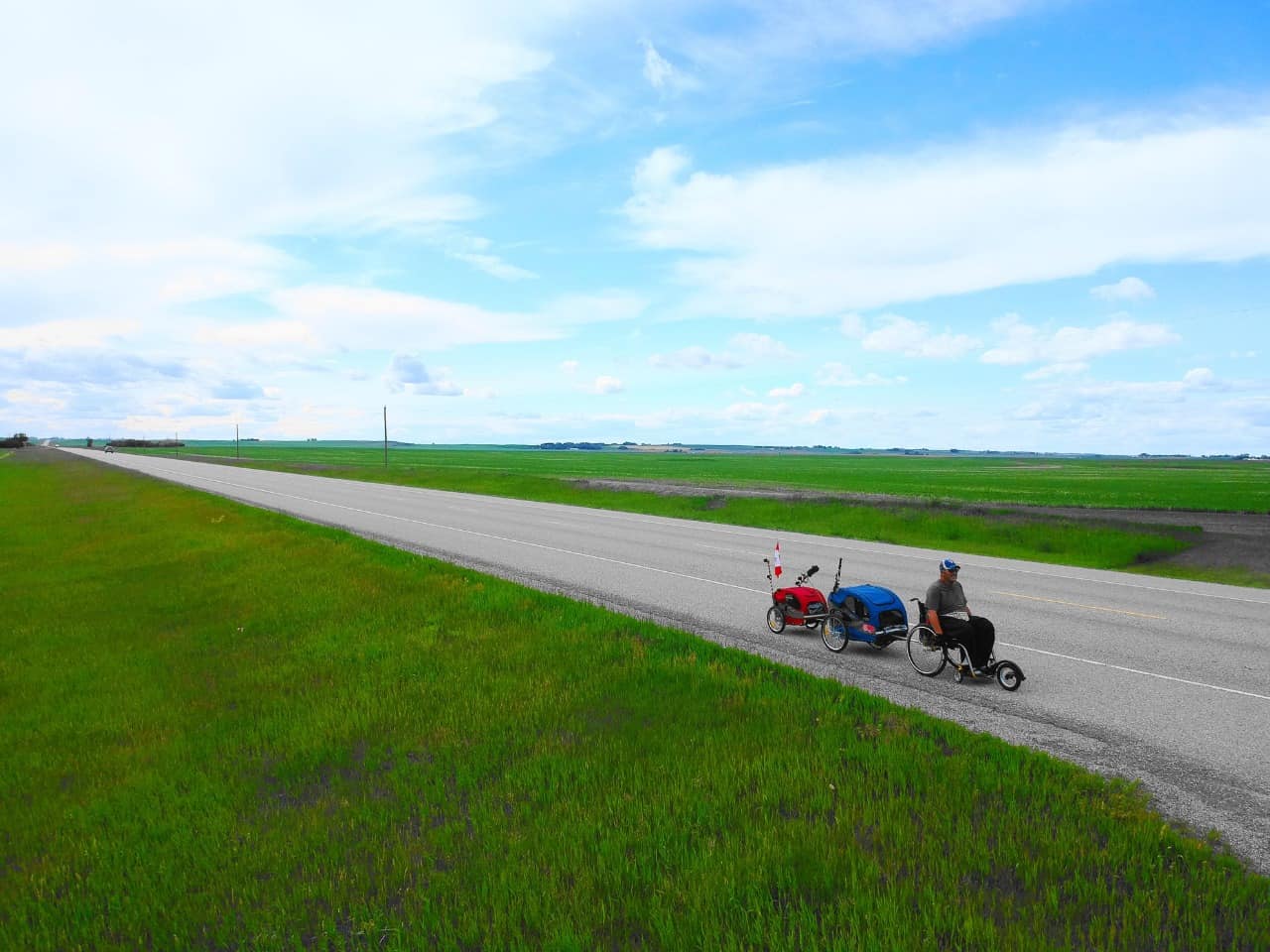 To make a point, sometimes you have to go really far!

After three years of preparation, and with little pomp and circumstance – not even the usual social media blasts – on July 1, 2019, Warren Schlosser quietly left Calgary, Alberta, Canada to embark on a 5,200-kilometer (3,231-miles) journey just to make a point:  he’s doing the road trip in his wheelchair. 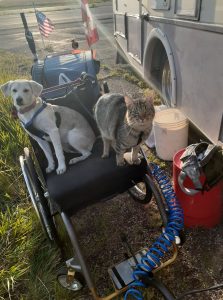 Not since Rick Hansen, another Canuck, embarked on the “Man in Motion World Tour” over 30 years ago, has someone taken on such an incredible wheelchair challenge. Using only his arms to propel him almost the entirety of North America. Accompanying him on this endeavor are his two furry companions, Luna and Taquito (Mexican rescues). Also along for the adventure, is his assistant and friend, Jed Vaughn, a freelance travel writer and the de facto photographer, videographer, social media guru and driver escort for the RV they stay in. Jed is definitely a man with many hats!

Warren wanted to show people that being disabled should not hold you back from “functioning in society in productive and meaningful ways”. He’s demonstrating that disabled people can do amazing things!  And despite being in constant pain from his injuries, Warren’s positive attitude and sunny disposition helps him make friends wherever he goes.

For this trek, he set his fundraising goal at $100,000 with the intention of splitting the funds equally between two charities for each country he travels through. At this writing, he has raised almost $8,000, but he feels hopeful more will come in even after he reaches his destination sometime in mid-December.

Warren learned how to deal with adversity early in his adult life. In 1989, happily married to his high school sweetheart, his wife suddenly passed away from a severe asthma attack. It was then he took on the first big challenge in life, raising his four young boys (ages 8 months, 3, 5 and 10) as a single dad. There were plenty of ups and downs, but today the boys are men with families of their own, and he is the proud grandfather to eight!

His next challenge would prove to be equally as great. In 2006, when his youngest boy had just left home, Warren was a passenger in a tractor-trailer when he was in a highway crash and sustained devastating injuries. After three long years of therapy, he was finally pensioned off, and with encouragement from some friends, decided to buy a one-way ticket to Mazatlán. By that time, he had ballooned to almost 350 lbs and was on 24 pills a day for pain management.

After arriving in Mazatlan, it didn’t take him long to fall in love with the city and find his niche. The Malecon was the best place for him to get exercise using his wheelchair. This is how he managed to bring his weight down, and reduce his medications drastically. It is also how most of us in Mazatlán know Warren… free-wheeling along the Malecon with his furry companions! 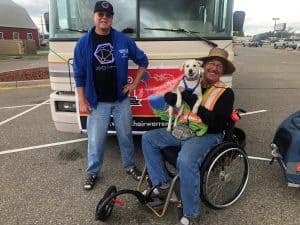 On this trek, Warren is averaging about 30-35 kilometers a day and is on the road from about 8 am to 3 pm. Luna and Taquito, who are both leash-trained, are tucked away in their own personal little trailers attached to his titanium wheelchair. Sometimes, hey will even trot alongside him, but when it gets too hot,  into the RV they go where they snuggle up to each other for a nap.

Since leaving Canada, Warren and his team have experienced all sorts of weather and terrain. He can’t wheel if there’s a threat of lightning or if the winds are over 17km/hr, so sometimes the team opts to drive part of the way until the trip can once again resume. One time, after having a short break, Warren resumed wheeling and then suddenly realized he was heading in the wrong direction! No wonder things had started to look familiar. But even hailstones the size of golf balls, as occurred in North Dakota, or the threat of a tornado near Sioux City can’t stop this dynamo.

People in all three countries have been more than generous with their time and assistance. Like the kind staff at Tenderhearts Veterinary Clinic in North Platte, Nebraska who donated their services and gave Warren’s furry family a check-up and clean bill of health. 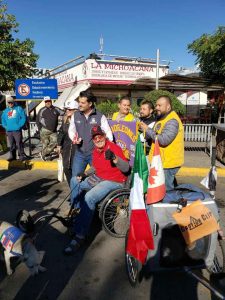 Nogales – greetings from the mayor!

Or the great people of Nogales. As soon as Warren crossed the border into Mexico, he was greeted warmly by the mayor, the US consul, local media and Alvaro Romero from the Venados baseball team. Ever since then, locals and dignitaries have been greeting him all along the way. The Venados team continues to assist with accommodations, care, and security on his route south.

When I first interviewed Warren last month, he was 130 kilometers south of the Mexican border, having crossed that milestone at exactly the four-month mark. He was being escorted by the Federales (Mexico’s federal police) for his safety because the road he was traveling on has no shoulder. In Hermosillo, he had the media following him and was invited to watch a baseball game while there. He has become quite a celebrity on this side of the border! And the Federales continue to help him along the way as needed.

Warren is definitely an inspiration to many, but one question remains:  Who is Warren’s inspiration? Over the years, and especially on this trek, he has met many people that inspire him. One young man’s tale was particularly notable.

In January 2008, while walking his dog early one morning, Robert was hit by a drunk driver and pinned against a tree. In a flash, the lower right side of his body was gone and he found himself wheelchair-bound. But that doesn’t stop Robert from doing what he loves; camping! He has traveled everywhere; camping wherever he goes despite his physical limitations.

Warren continues to be amazed by all the different welcomes he’s been getting along his journey. In fact, some people have even made special trips just to see him on the road. One fellow rode his motorcycle three hours just to meet up with him. Even tribal chiefs make sure they greet him as he passes through their lands.

But maybe Warren’s best inspiration is family-based. His mum at 80, is still traveling on her own to Mexico! Nothing stops the Schlosser family. They’ve always had the adventurous curiosity of “what’s over the next hill?”.

To DONATE and read Warren’s adventure blogs go to www.wheelchairwarren.com